Collective bargaining in the academy within the United States started in 1918 when a group of faculty at Howard University joined forces with the AFT (American Federation of Teachers) to try to improve their working conditions, but the initiative ultimately failed. Some of the earliest bargaining agreements were achieved for faculty in the 1930s and 1940s (Herbert & Apkarian, 2017). However, these early contracts were the result of informal and voluntary recognition by institutions, rather than legal mandates or enabling legislation. In the 1960s, bargaining became more widespread, and the American Association of University Professors and the National Education Association attempted to secure bargaining units. Since then, unionization of faculty and other campus employees (including graduate students) across the country has grown substantially to the point that 27% of faculty are represented by a union at over 500 institutions around the US.

Yet, over the decades there has been resistance to unionization in the academy, much of it coming from faculty themselves. Beyond ideological notions about unions, some academics hold the view that they are not workers in the traditional sense, and thus unionization is not appropriate – instead, some faculty regard themselves as elite professionals who do not need representation. Furthermore, some faculty may feel unionization erodes principles of shared governance and diminishes collegiality (Cain, 2017).

Yet, as an editorial on this topic in the Chronicle of Higher Ed quips, “Academic work is labor, not romance” and further, “the romanticization of academic labor is one of the most effective ways to obscure its actual causes” (Matthiesen, 2016). This concept of academics as laborers (including graduate student labor) is supported by the National Labor Relations Board. The fact is, though many faculty may feel our work is a ‘labor of love,’ it is still a job, and most of us rely on it for financial stability.

The last few years have seen a significant increase in collective bargaining by academic laborers (Herbert et al., 2020). The National Center for the Study of Collective Bargaining in Higher Education and the Professions tracks faculty unionization and reports that over a quarter of all faculty (tenured and adjunct) in the United States are represented by a union, the vast majority of which are at public institutions (Berry & Savarese, 2012; Herbert et al., 2020). The figure below highlights this growth 2013-2019, though it doesn’t show the growth since COVID-19 began. 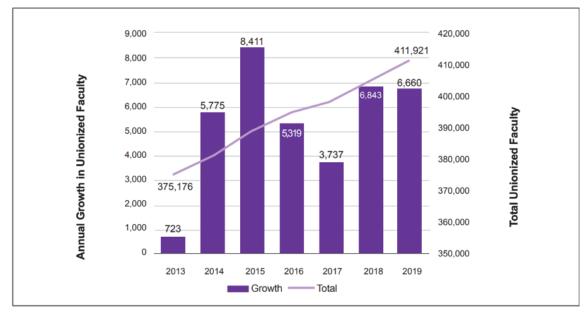 So what gains are made by faculty unions? The peer-reviewed literature on the effects of faculty unionization on faculty wages, working conditions, and job satisfaction is fairly extensive and stretches over 50 years. Drawing on a 2017 ASHE (Association for the Study of Higher Education) Report, which thoroughly reviews the research (Cain, 2017), a summary is provided below (but a closer read of this 150-page monograph is recommended for those interested).

A large portion of studies on the effects of faculty bargaining have focused on compensation, though much of this literature dates back to the 1970s and 1980s. More recent literature comparing unionized with nonunionized faculty work and several comprehensive studies have found a union wage differential for different university types (see Cain 2017 p. 65), though overall the results are somewhat unsatisfying due to inconsistent methodology and certain data shortcomings. Interestingly, there is some recent evidence suggesting that strong unionization can help ameliorate the gender wage gap for faculty (Dominguez-Villegas et al., 2020).

Faculty union scholars have also focused on procedural issues such as tenure, job security, grievance and due process. As a whole, the research has consistently found that unionization is associated with the formalization of tenure and other procedures, which increases transparency and decreases the incidence of bias or favoritism (Cain, 2017). Additionally, recent findings largely suggest that unionization is especially important for women, with studies finding unionized universities have a significantly reduced gender promotion gap. Further, there is evidence suggesting that simply having a faculty union is positively associated with the proportion of women on the faculty (controlling for other institutional factors).

Unions can also help negotiate stronger retrenchment policies for faculty (retrenchment refers to the dismissal of faculty when a university is undergoing financial stress), though the literature does not suggest unions necessarily prevent faculty layoffs but instead assure some transparency and faculty voice in the process (Cain, 2017). A 2021 review of 30 years of retrenchment and restructuring data, suggests that “all faculty are at risk, if not in the same ways” and that “tenure is not the sinecure that most people, many faculty members included, believe it to be” yet unionization can help to “preemptively build and maintain structures that ensure that [faculty] have a seat at the table in times of crisis” (Cain & Leach, 2021).

Faculty unions have also shown their worth in terms of negotiating safe working conditions for faculty during the ongoing COVID-19 pandemic. Over the last two years, online publications of higher education such as insidehighered.com and chronicle.com continue to document the outcomes of union negotiations regarding positivity rate thresholds for when to go remote, classroom density, vaccination requirements, and so on (Flaherty, 2021). Furthermore, the pandemic itself has strengthened faculty unionization and united academic workers in the pursuit of safe working conditions (Johnson & Patel, 2020).

Given the ongoing pandemic, the national financial crisis in higher ed, and growing awareness about the benefits of faculty unions, the outlook seems to be that the incidence of organizing on campuses will only continue to grow. It will be interesting to follow along as scholars of unionization study union-nonunion differential in faculty outcomes relevant to these difficult times.