In this edition we are featuring Judith Gabriele, the ever-smiling and elegant French language faculty. Judith has long served the College and the UFE – this year marks her 30th year teaching at Evergreen, and she has been a UFE Steward since the formation of the faculty union. Judith has served on the UFE Coordinating Committee for the last five years.

Judith was raised in Tacoma. After high school, she received her teaching certification in elementary and k-12 education. However, she found she didn’t love teaching to these ages, so she earned a bachelors in nursing and worked in healthcare for many years. After helping her parents through some challenging health conditions and eventually grieving their deaths, which were only 19 days apart, she found she needed a change. She took a year off work and went back to school to do something she loved – speaking French and traveling in France. She enrolled in a Masters degree program at Middlebury College in Paris, and was hired at Evergreen to teach French in 1991 even before graduating.

Judith didn’t have much union experience in 2005 when Doranne Crable and Laurie Meeker asked her to join in the effort to start a union for faculty on campus. As Judith shared, “my dad was always a strong supporter of unions. He was in various unions himself. I remember he was on the school board and was always fighting in favor of teachers. At that time, there was a lot of political fighting to desegregate schools, and he was involved in that. So I grew up with the notion of standing up and fighting for what was right.” Judith readily joined the UFE, partly because it seemed like a place to build community and collaborate with other faculty – something that was hard to do as a part-time faculty who often worked in travel abroad programs.

Judith also got involved in the UFE because “the union seemed like a place to work on faculty equity and belonging. As an adjunct, I always felt somewhat like an ‘outsider,’ a marginal appendage to the College. But I was always treated like an equal and part of the team within the union, and over time it became a wonderful, supportive community for me on campus.”

To Judith, the benefits of the UFE are many: “Equity and solidarity for faculty. Also, a stable wage and job security for adjuncts.” Judith recalls one year when the UFE held a rally to promote equity for adjunct faculty, “the message we were trying to get out was that adjuncts teach alongside regular faculty, so why pay them less?” Over the years, the UFE has achieved a lot for adjuncts, including pay increases, expansion of medical leave, increased job security through establishment of multi-year contracts, a conversion of four long-term adjunct faculty to regular status in 2008, and the transition of 10 long-term adjuncts to regular status half-time EWS faculty from 2016-2020. 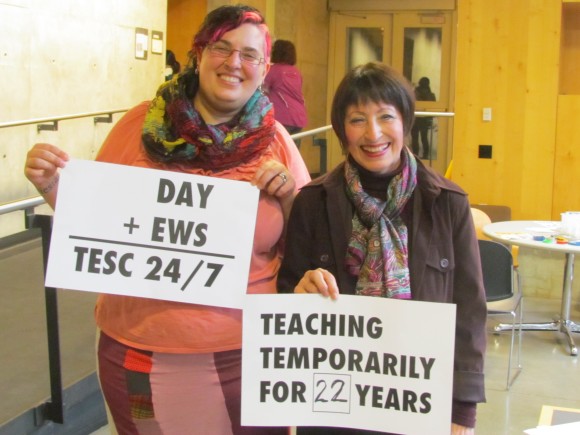 Thank you Judith for your commitment to Evergreen and for your long-time support of the United Faculty of Evergreen!