You can read a detailed timeline of the union’s history through 2013 on the UFE website. This series features select highlights!

In 2002, “enabling legislation” was passed in Washington State, a new statute that granted collective bargaining rights to faculty at the state’s public 4-year institutions of higher education (RCW 41.76). The statute provides that there can be only one bargaining unit at each of the 4-year institutions. This led the Washington State Public Employment Relations Commission (PERC) to take the position that all individuals who hold faculty status must be in the bargaining unit.

After the enabling legislation was passed, the Washington Education Association (WEA) funded a full time higher-education organizer, Gary McNeil, to organize the regional 4-year institutions. In 2006, Eastern, Central, and Western all won their elections to establish collective bargaining units.

In 2005, a large organizing committee was established at Evergreen, and we began organizing with meetings of interested faculty. During the 2005-06 academic year, faculty deliberation continued at faculty meetings with panel presentations and discussions. The organizing committee met with nearly every member of the faculty to determine interest in unionizing, and by spring quarter we were confident that a majority supported the formation of a faculty union at Evergreen.

On May 1, 2006, we filed our intention to become a certified collective bargaining unit with PERC and scheduled the vote for fall 2006.  On Oct. 31, 2006 the vote results were tallied at PERC in favor of United Faculty of Evergreen/United Faculty of Washington State (UFE/ UFWS ) “as exclusive bargaining representative for the purpose of collective bargaining with their employer” (PERC case 20368-E-06-3150; certification document Nov. 8, 2006). Unofficial motto: “Boo!” 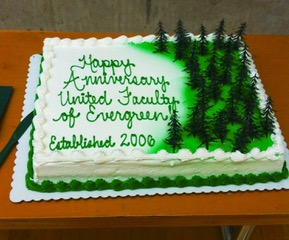